Following on from the  exploration of the impact of high speed travel on the pantograph-OLE interface from Dr. Pedro Antunes and Prof. João Pombo of The Institute of Railway Research, University of Huddersfield Centre of Excellence in Rolling Stock leads which you can read here. Next Centre of Excellence in Infrastructure leads University of Southampton will delve into some of the key challenges facing existing and future infrastructure for high speed rail.

Professor William Powrie, Professor of Geotechnical Engineering, School of Engineering, University of Southampton introduces us to Infrastructure for high speed railways and the challenges it presents: some new, and some arising from well understood engineering principles being applied in ways that lead to perverse results, from which we sometimes struggle to extricate ourselves. This short note covers some recent research carried out at the University of Southampton on high speed railway infrastructure in general. It is far from exhaustive and is restricted essentially to a few pictures and some headlines, covering four aspects of the behaviour or efficiency of the linear infrastructure of a high speed railway. 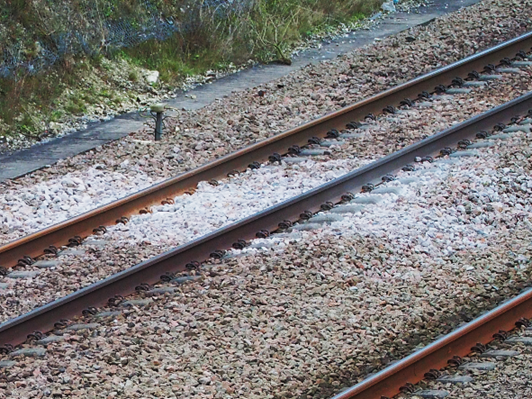 The first is targeted repair of defects. The picture shows a defect on a ballasted railway track, but the principles would be equally applicable to a defects below a slab track. Defects are apparent on a ballasted track by the white patches shown in the photo on the right. This “whitespotting” occurs when there is a loss of support locally below the track. As a result, the track moves too much as trains pass over the defect, and if left unremediated the situation may rapidly deteriorate. Such defects may indicate a locally soft subgrade below the ballast, but we have seen the same symptoms at a transition between different track types, near a local hard spot, and over an expansion joint on a bridge which is allowing too much movement as trains cross. 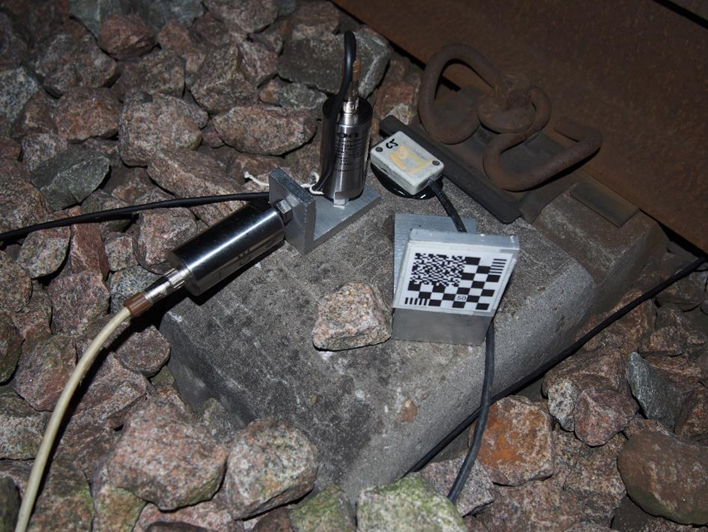 To solve a problem, we must first understand and quantify it. Over the past decade or so, we have developed a number of ways of measuring track or subgrade deflections as trains pass. We can make a video recording and analyse the images to give us a time trace of the movement directly.  We can use geophones (left, with a video target) to measure the velocities, integrating once to get the displacements; or we can use small, very affordable MEMs accelerometers, similar to those used in smartphones. These measure acceleration, which we integrate twice to get deflections.  Processing the signals is quite an art, but we have now perfected that so we can get good data of track movements as trains pass.

One particular problem site was at a transition from single block to duo block sleepers, where a concrete under track crossing also gave a local variation in support stiffness. The defect was unsuccessfully tamped, but a lasting repair was achieved by measuring the deflection sleeper by sleeper and packing up the track by the exact amount needed. Accelerometers were then used to monitor the effectiveness of the repair.

Each of the purple crosses in the figure above represents the vertical movement of the track during the passage of an individual train; the first chart (on the left) shows that the track was deflecting about 3-4 mm under load. Tamping (indicated by the first vertical dotted line) improved matters briefly, but then things rapidly got worse. Targeted repair by spot packing based on our measurements (indicated by the second vertical dotted line) reduced track deflections to about 1 mm. Importantly, the improvement was sustained. The middle chart represents a different sleeper. Here, the movement was initially acceptable, at about 1 mm. Damage caused by tamping increased the deflection to 6-8 mm before an obviously worsening situation was successfully repaired, with track movements reduced to <1 mm. The chart on the right shows a third measurement location, where tamping made no lasting improvement and seems to have triggered a process of deterioration.

Learn more in the second half of this article.

Tweets by UKRRIN
Back to top