Following on from the  exploration of the impact of high speed travel on the pantograph-OLE interface from Dr. Pedro Antunes and Prof. João Pombo of The Institute of Railway Research, University of Huddersfield Centre of Excellence in Rolling Stock leads which you can read here.

Centre of Excellence in Infrastructure leads University of Southampton will delve into some of the key challenges facing existing and future infrastructure for high speed rail. The first part of this article here, following on from this in the second half of the article below we are continuing the exploration of high speed infrastructure.

The second area of potential concern is ballast flight, in which turbulence and vibration caused by a 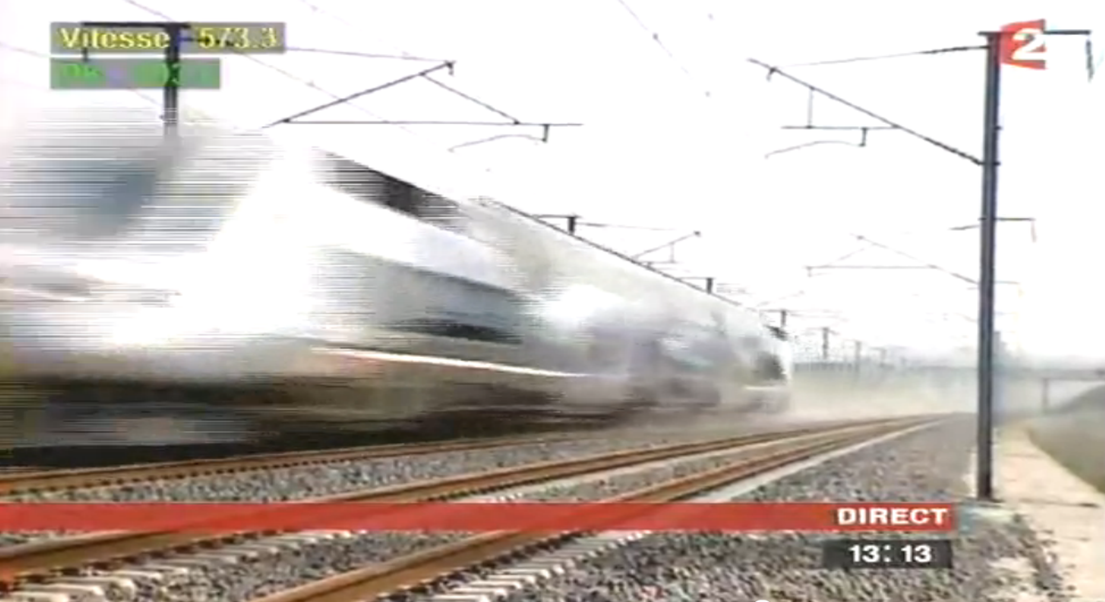 passing train can cause individual ballast grains to become airborne.  The photo on the right is a still from the French world speed record run, in which the train reached 573 km/h on ballasted track. The video can be found at https://www.youtube.com/watch?v=8skXT5NQzCg. A cloud of dust is apparent in the wake of the train. This is indicative of the turbulence that could potentially cause ballast flight. This is obviously undesirable on a high speed railway line, where airborne stones could damage the train body, lineside structures or the rail itself if a ballast particle were to be crushed between the rail and a wheel. 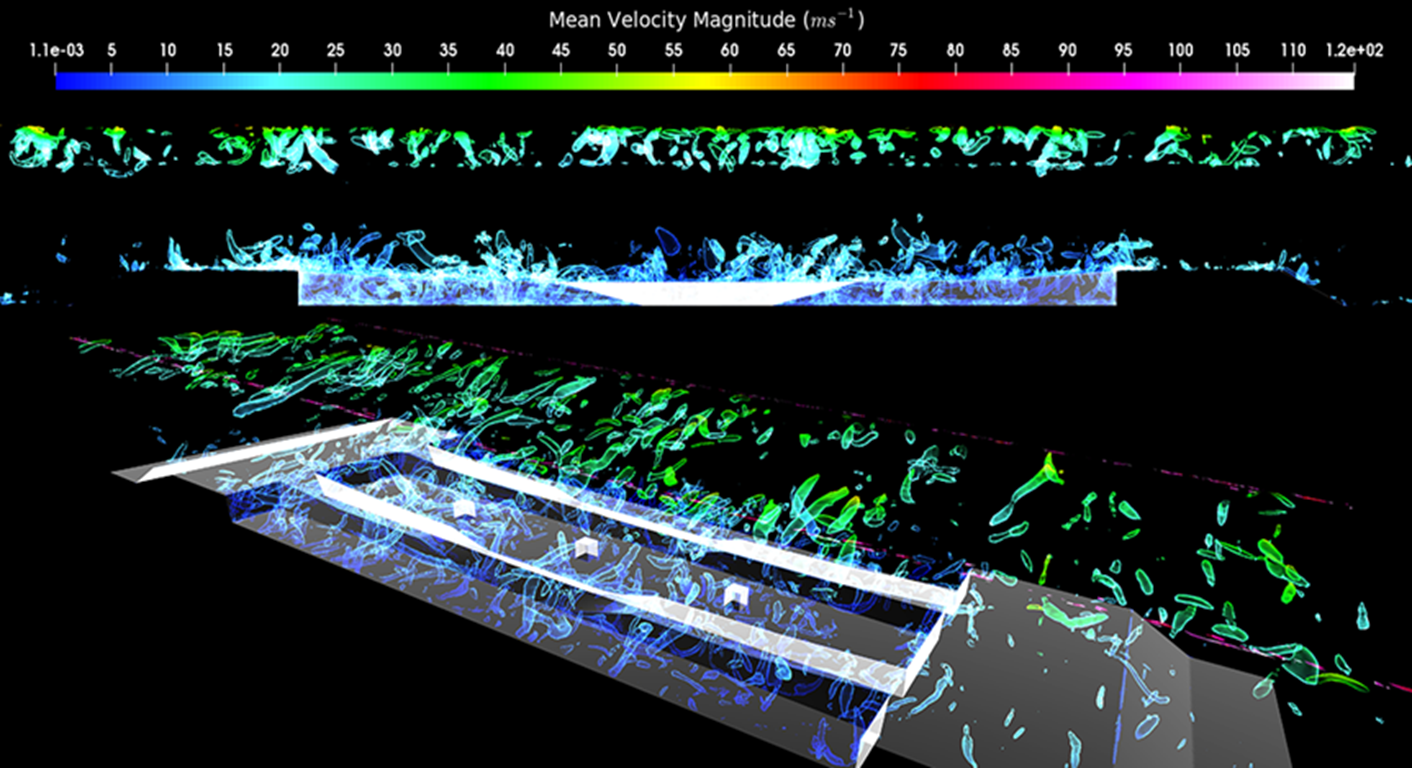 We’ve been using computational fluid dynamics to look at the aerodynamic forces on individual ballast grains, especially if they are left resting on top of a sleeper (for example, after maintenance). We have looked at the effect of the level and shape of the sleeper on the potential for ballast particles to become airborne as the train passes. The aerodynamics of the underside of the train are also significant. The conclusion we’ve come to, along with researchers elsewhere in the world, is that prevention of ballast flight is relatively straightforward at speeds up to somewhere between 320-350 km/h. Above that, because the aerodynamic forces tend to increase in proportion to the square of the speed, it becomes more challenging. That’s not to say it can’t be managed, but it does need explicit consideration and action. 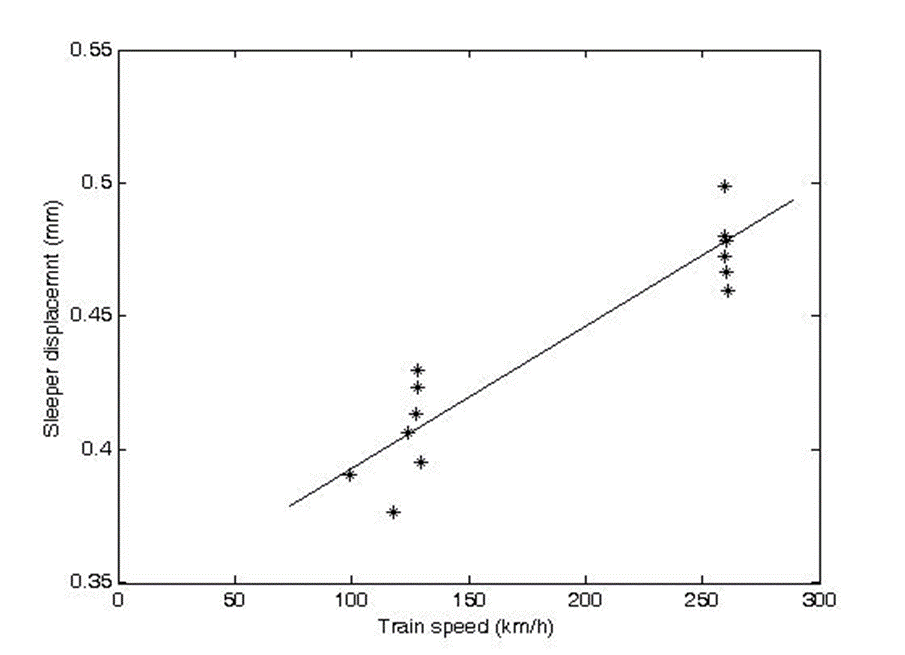 in both the technical and popular press. As train speeds approach the speed of surface (Rayleigh) waves in the underlying ground, resonance effects cause track movements to increase disproportionately. This is difficult to predict, so in accounting for it we tend to err on the side of (possibly extreme) caution. The graph on the right shows the vertical movement of a number of sleepers as a train passes, as a function of train speed. There is an increase in the vertical deflection of the track with train speed.  But it is important to notice two things. First, this is a false origin, so the the difference between the two sets of readings is actually rather small – less than 0.1mm. Secondly, the deflection is still only about half a millimetre, so it’s really nothing to get very excited about. It’s also worth saying that this measured effect is rather less than the empirical allowance traditionally made.

Analysing the effect needs some sort of numerical model. The figure on the right shows results from a finite 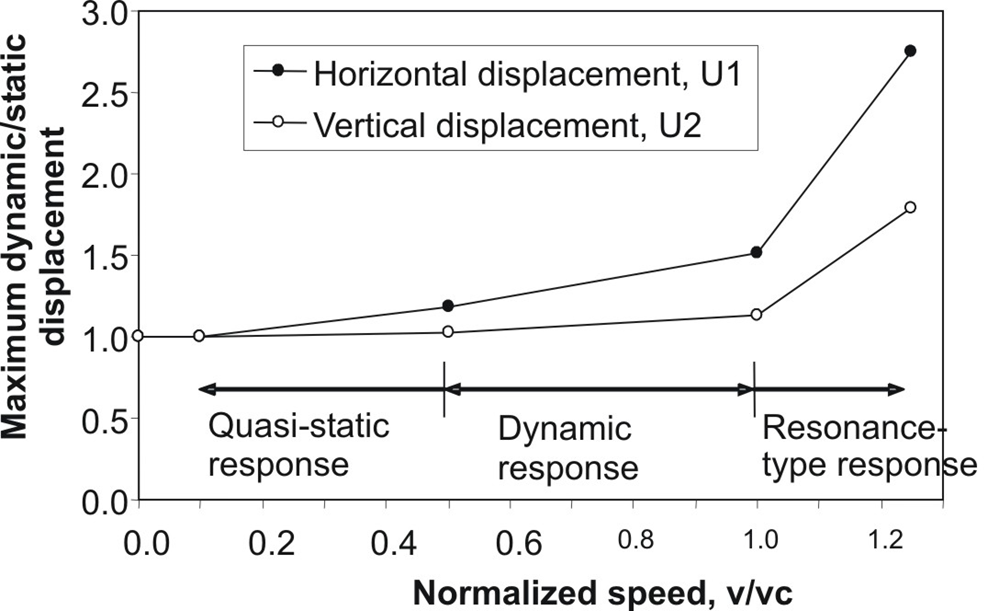 element analysis in terms of the ratio of the dynamic to the static displacement as a function of train speed. After an initially static response, dynamic amplification starts to become apparent but it’s only really when we are really quite close to the speed of Rayleigh waves in the ground that we start to get a major amplification. But again it’s not necessarily a problem; if the ground is stiff, even if the dynamic magnification is a factor of five, five times almost nothing is still an acceptable deflection. 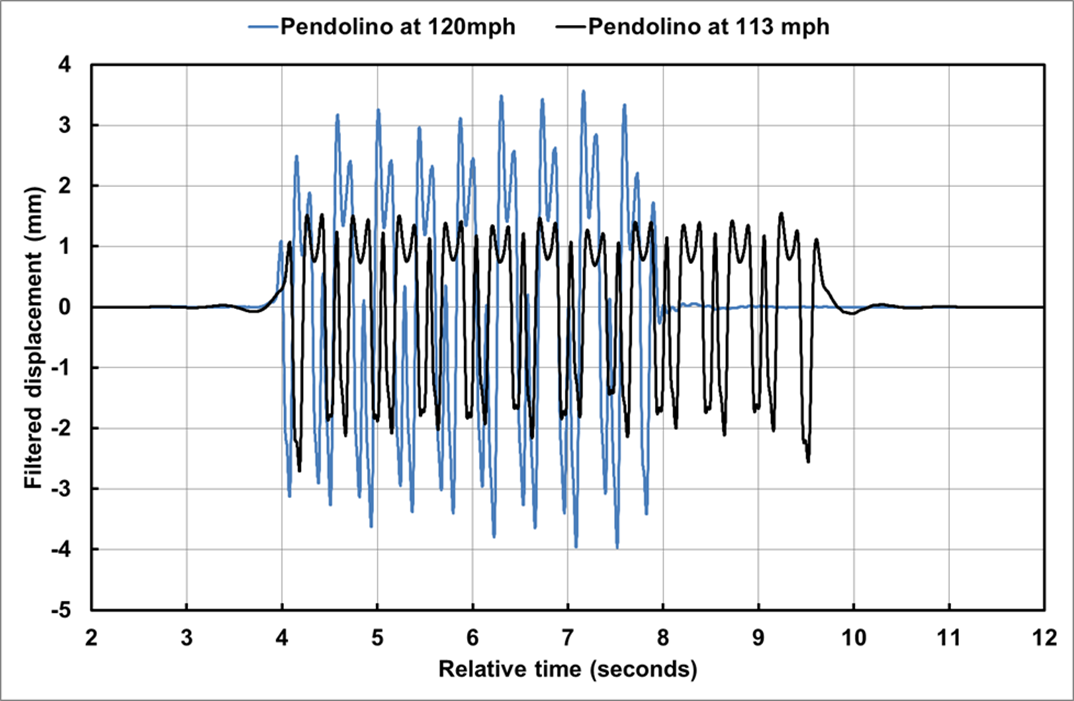 Soft ground makes matters worse in two ways. Track movements will tend to be larger anyway, and it is more likely that trains will be travelling near the critical velocity. This is illustrated by the figure on the right, which shows traces of displacement against time (obtained using geophones) during the passage of Pendolino trains at a known problem location. At a speed of 182 km/h (113 mph, the trace in black), the sleeper deflection is about 3 mm. At 193 km/h (120 mph, the trace in blue), the deflection is nearly double although the speed is only 6% higher. However at this location, the ground conditions are particularly poor, with the railway crossing a significant zone of soft, organic clay and silt.

The next figure plots both measured and calculated deflection against train speed, using a different model and 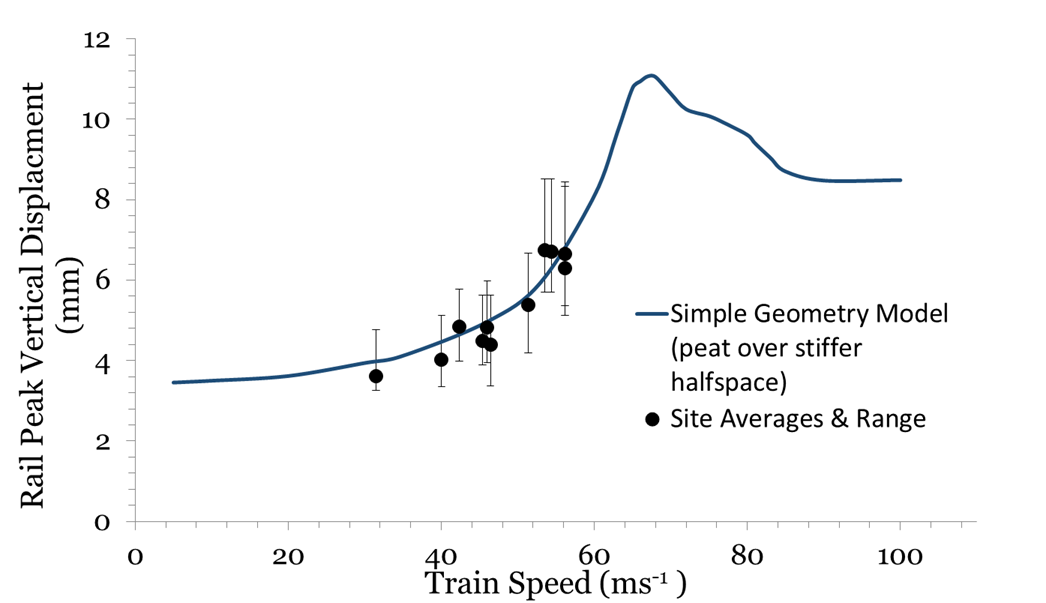 parameters representative of the WCML measurement site. The model confirms that we are indeed close to the resonance peak. The shape of this modelled curve is different from the shape of that shown earlier, reflecting uncertainty in the ability of models to match and predict actual behaviour. At present, a cautious approach is to try and ensure that the speed of Rayleigh waves in the ground is generally 67% greater than the design train speed. This is probably over-conservative so there is considerable scope for achieving worthwhile design efficiencies by improving our understanding of this phenomenon.

The last issue we will look at is overhead electrification mast foundations. The Great Western 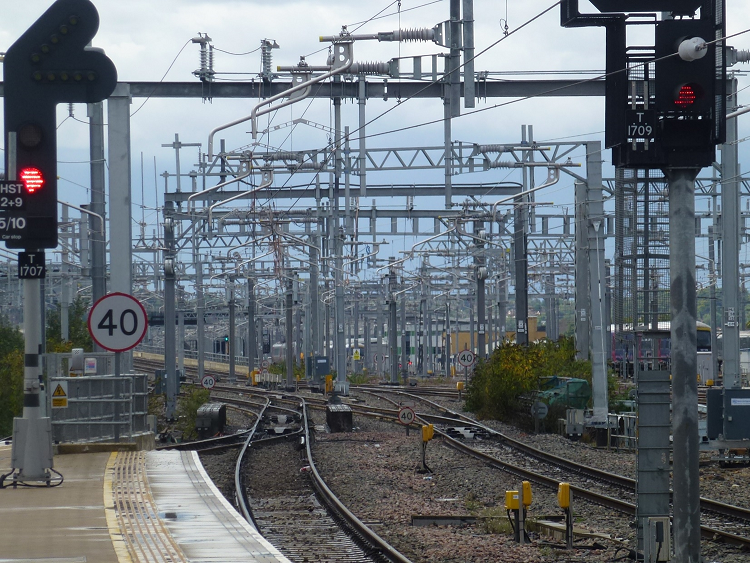 electrification programme went over budget by at least £1.2 billion. The causes were analysed in the recent RIA Electrification Cost Challenge; one was the design of the overhead line equipment itself. Traditionally in the UK, our overhead line structures have been quite elegant and economical. The structures used on the Great Western electrification are much heavier, and a new method of designing the pile foundations used to support them was developed. The method is basically sound, but it wasn’t interpreted or implemented very sensibly and gave pile lengths that were about twice those obtained using the traditional “OLEMI” method, based on a series of field tests carried out in Europe in the 1950s.  Some of the piles as designed were so long that they couldn’t physically be installed. 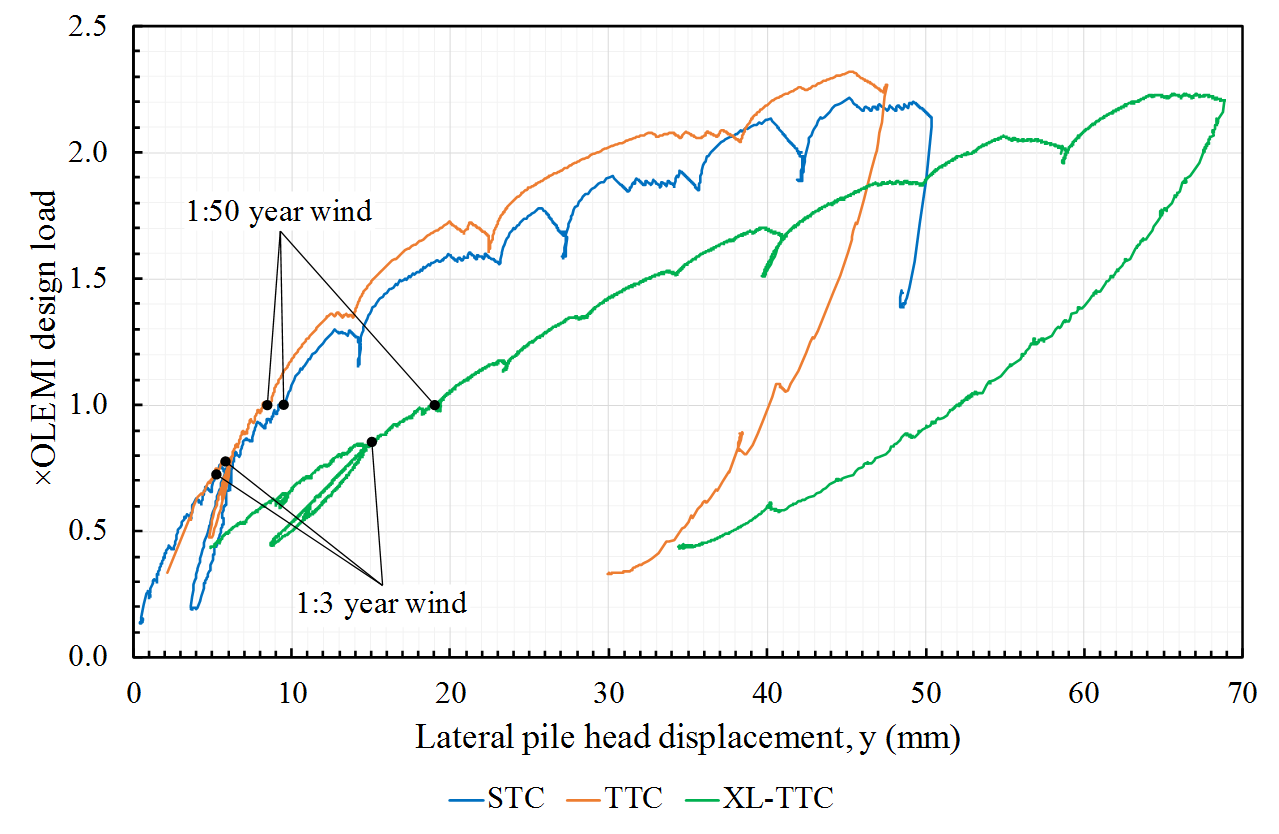 evidence base for the empirical method. So the University of Southampton, in collaboration with various partners, specified and carried out some field tests on a redundant railway embankment at the Network Rail High Marnham test site. We designed a number of foundations for Great Western style OLE structures using the empirical OLEMI method, and tested them to see what load they would take. The figure on the right plots the load (expressed as a proportion or multiplier of the OLEMI design load) against the pile head displacement. This demonstrates that the empirical approach, which gives a much more economical pile length, has ample capacity when used for the heavier OLE support masts.

In summary, our research has shown that

There is a further lesson from the analysis of cost over-runs on the Great Western electrification programme that is relevant for high speed rail. We sometimes make decisions about risk and specification without applying mature engineering judgement. There are public and political pressures as well: many of us, including the public, have a poor understanding of risk, which can be exploited by those seeking a particular outcome.  Every contractual interface involves a handover of risk, and options need to be considered. If we want to eliminate future maintenance, or risk of failure, we have to contemplate unacceptable initial costs. We sometimes calculate whole life cost, but generally fail to do so and consider our wider options at a system level. We need to take our thinking to a higher level, and find effective ways to communicate some nuanced decisions to a profession and to a public that has had enough of experts.

Tweets by UKRRIN
Back to top